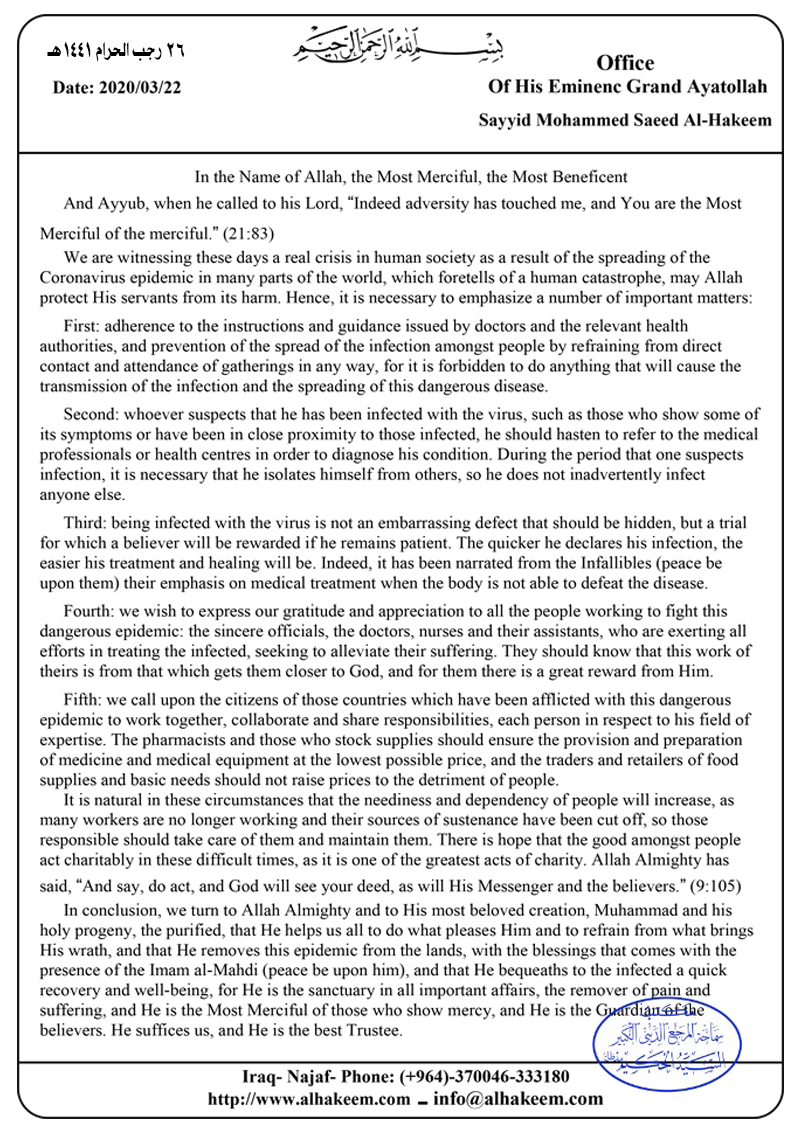 In the Name of Allah, the Most Merciful, the Most Beneficent

And Ayyub, when he called to his Lord, “Indeed adversity has touched me, and You are the Most Merciful of the merciful.” (21:83)

We are witnessing these days a real crisis in human society as a result of the spreading of the Coronavirus epidemic in many parts of the world, which foretells of a human catastrophe, may Allah protect His servants from its harm. Hence, it is necessary to emphasize a number of important matters:

First: adherence to the instructions and guidance issued by doctors and the relevant health authorities, and prevention of the spread of the infection amongst people by refraining from direct contact and attendance of gatherings in any way, for it is forbidden to do anything that will cause the transmission of the infection and the spreading of this dangerous disease. Second: whoever suspects that he has been infected with the virus, such as those who show some of its symptoms or have been in close proximity to those infected, he should hasten to refer to the medical professionals or health centres in order to diagnose his condition. During the period that one suspects infection, it is necessary that he isolates himself from others, so he does not inadvertently infect anyone else.

Third: being infected with the virus is not an embarrassing defect that should be hidden, but a trial for which a believer will be rewarded if he remains patient. The quicker he declares his infection, the easier his treatment and healing will be. Indeed, it has been narrated from the Infallibles (peace be upon them) their emphasis on medical treatment when the body is not able to defeat the disease.

Fourth: we wish to express our gratitude and appreciation to all the people working to fight this dangerous epidemic: the sincere officials, the doctors, nurses and their assistants, who are exerting all efforts in treating the infected, seeking to alleviate their suffering. They should know that this work of theirs is from that which gets them closer to God, and for them there is a great reward from Him.

Fifth: we call upon the citizens of those countries which have been afflicted with this dangerous epidemic to work together, collaborate and share responsibilities, each person in respect to his field of expertise. The pharmacists and those who stock supplies should ensure the provision and preparation of medicine and medical equipment at the lowest possible price, and the traders and retailers of food supplies and basic needs should not raise prices to the detriment of people.

It is natural in these circumstances that the neediness and dependency of people will increase, as many workers are no longer working and their sources of sustenance have been cut off, so those responsible should take care of them and maintain them. There is hope that the good amongst people act charitably in these difficult times, as it is one of the greatest acts of charity. Allah Almighty has said, “And say, do act, and God will see your deed, as will His Messenger and the believers.” (9:105)

In conclusion, we turn to Allah Almighty and to His most beloved creation, Muhammad and his holy progeny, the purified, that He helps us all to do what pleases Him and to refrain from what brings His wrath, and that He removes this epidemic from the lands, with the blessings that comes with the presence of the Imam al-Mahdi (peace be upon him), and that He bequeaths to the infected a quick recovery and well-being, for He is the sanctuary in all important affairs, the remover of pain and suffering, and He is the Most Merciful of those who show mercy, and He is the Guardian of the believers. He suffices us, and He is the best Trustee.

Is it permissible to eat crab, lobster or prawn?

Amongst seafood, it is unlawful to consume anything but fish that have scales as well as shrimps and prawns. Other types of fish and shellfish are not lawful.

What is your edict on watching sexual scenes in films, which arouse feelings of lust and subsequent involuntary discharge of semen?

It is not permissible to have sexual enjoyment from watching movies that causes sexual desire.

Can I use share of the Imam (peace be upon him) for the maintenance and/or the construction of a Hussainiya which is run by my family?

Using the share of Imam (peace be upon him) from the khums is not permissible without referring to the Marji’ or his appointed agent.