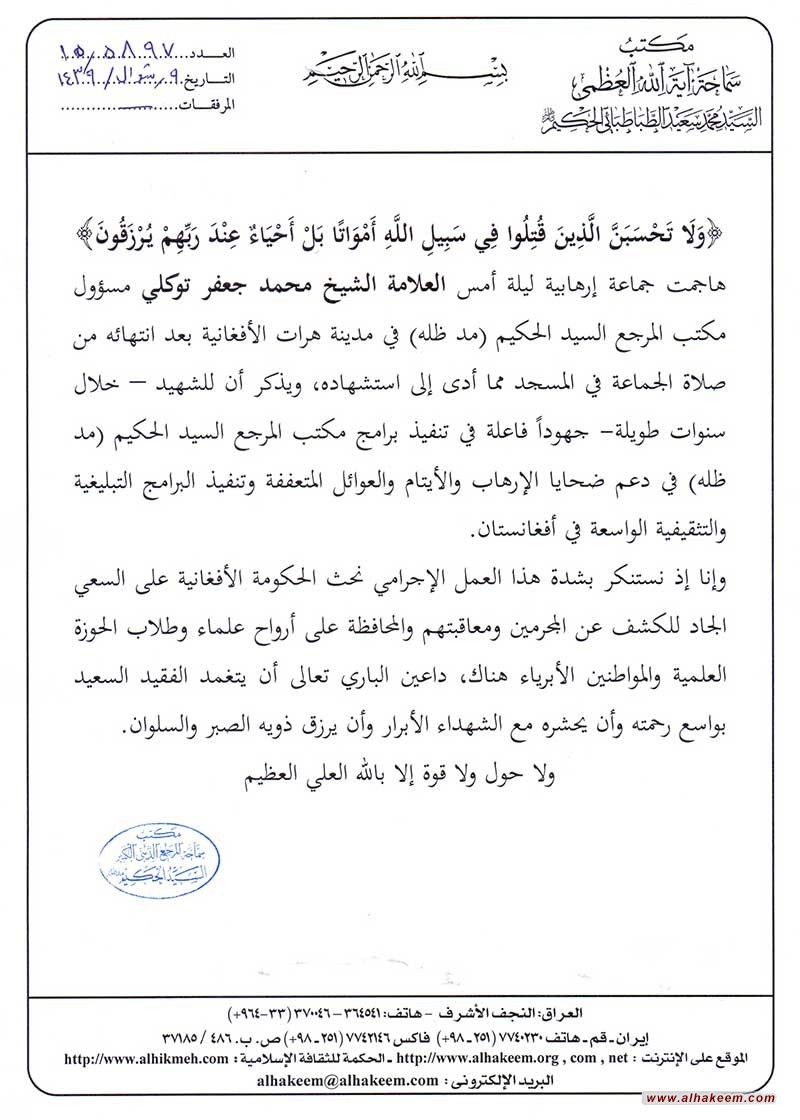 “And reckon not those who are killed in the way of Allah as dead; rather, they are alive; they are provided substance from their Lord.” (3:169)

The terrorists attacked last night Allama Shaikh Mohammed Ja’far Tawakkuli, the head of the office of His Eminence Grand Ayatollah Sayyid Al-Hakim (may God prolong his life) in the Afghani city of Herat, after having lead the congregational prayers in the mosque. This heinous attack led to his martyrdom. Through his active his efforts – for many years – he aided the application of His Eminence’s programs in supporting and helping those injured in acts of terrorism, as well as orphans and needy families, and in implementing his programs in the propagation of the message of Islam on a wide scale across Afghanistan.

We condemn this act of terrorism in the strongest terms, and we urge the government of Afghanistan to strive seriously to uncover the criminals, to punish them and to protect the lives of the scholars, the students of the religious seminary and the innocent civilians there. We pray to the Almighty Creator to cover the felicitous deceased with His vast mercy, and to raise him amongst the righteous martyrs, and to bestow patience and solace upon those he left behind.

And there is no power, nor might, save that of Allah, the Most High, the Supreme.

Is it necessary for the imam of the congregational prayer to be appointed by the Marja?

No, it is not one of the conditions.

I have been offered a job at a supermarket that sells alcohol. I requested if I can avoid working on the cashier, but the manager replied it is very unlikely due to the necessity of me having to work there at times. Will it be lawful for me to take this job?

It is not permissible to be part of a transaction of selling wine or pork or any meat not slaughtered according to the Sharia. It is permissible to sell other items.

How can I control my sexual desire?

It has been reported in the narrations the recommendation to get married. If this is not possible, one can decrease the sexual desire by fasting.