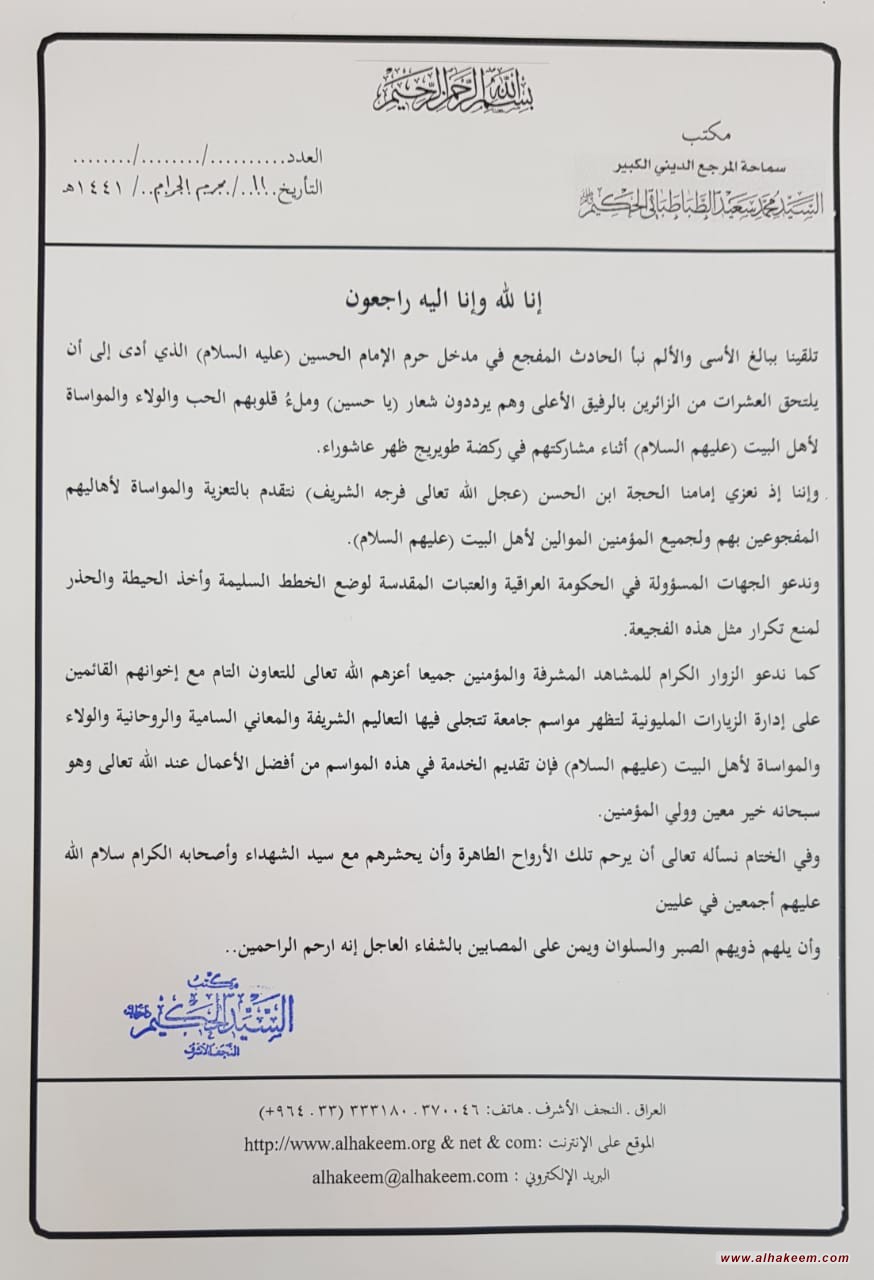 Indeed we are of Allah and to Him we shall return

It is with great sadness and pain that the news of the tragedy at the entrance of the holy shrine of Imam Hussain (peace be upon him) has reached us, which led to the loss of tens of lives, as they repeated the chant “Ya Husayn”, their hearts filled with the love and grief for the Ahlulbait (peace be upon them), during their participation of the Tuwairich Run on the afternoon of Ashura.
We, therefore, pay condolences to the Imam of our Time (may Allah hasten his reappearance) as well as to their grieving families, and to all the believers and lovers of the Ahlulbait (peace be upon them).
We call upon those responsible in the Iraqi government and the Custodianship of the Holy Shrines to establish sound plans and to take precautionary measures to ensure that such a tragedy does not occur again.
Similarly, we call upon all the respected visitors to the holy shrines – may Allah honour them – to act in coordination with the brothers who have been tasked with managing the millions of visitors in order to enable the illumination of godly teachings and guidance, and the expression of love and sorrow for the Ahlulbait (peace be upon them). Indeed, such service during this season is amongst the greatest of deeds in the eyes of Allah Almighty, and He is the greatest supporter and the Guardian of the believers.
In conclusion, we supplicate to Allah Almighty to bless those pure souls and to raise them in the highest ranks with the Master of Martyrs and his noble companions, may Allah’s peace and blessings be upon them all. We pray that He inspires their loved ones who they leave behind with patience and solace, and that He blesses the injured with a quick recovery, for He is the Most Merciful.

Is it allowed for a Muslim to debate and discuss the differences between the schools, or should this be the scholars' job? And if it is allowed, are there any criteria which one should have to engage in these debates? And what is your opinion concerning young Shia Muslims, who engage in these discussions?

A Muslim is expected not to speak in the matters of the Sharia without knowledge or without proof. There is no difference in this issue between the expert scholars and the regular layman. The difference is that the experts can obtain the evidences more easily through their research.

If there is no claim of marriage and a baby is born, and DNA establishes the identity of the father (a) is DNA accepted as legal evidence? (b) If so, what will be the fatherâ€™s responsibilities towards this child? (c) Will he inherit his father? (d) Will he be able to carry the name of his father?

The DNA is not considered evidence in the said case unless it leads to certainty in such a way that the chance of being wrong is Zero.

How can we prove Imamate from the Quran? If Imamate is such a backbone for Shia Islam and we believe that if one does not accept the Wilayah of Imam Ali (peace be upon him), he is at loss, then why did not Allah mention this directly in the Holy Quran, thus avoiding major disputes? How do we answer the objection that there is no proof about the Imamate of Imam Ali (peace be upon him) being essential?

If we attend a wedding reception held by Christian friend, and they serve separate halal food, is it permissible for us to dine there and consume what they claim to be halal food, while we also know that the food was cooked by Christians who may not know the Islamic dietary laws?

If the food does not contain meat then one can consume it if he does not know that it is najis. If the food contains meat then it must be established that it is slaughtered in accordance to the Sharia, in addition to not knowing that the food is najis. One can establish the lawfulness of the meat by knowing so himself, or by being informed by a Muslim who one expects to say the truth, or if the provider of the food claims that he obtained it from a Muslim as being slaughtered in accordance to the Sharia. The provider of the food can be non-Muslim who one does not expect to lie.